skip to main | skip to sidebar

Well , I finally shot a doe 2 weeks ago to put a close on my most frustrating deer season in a long time but getting in the woods and not killing something beats not getting in the woods. After this deer I knew I may go deer hunting a few more times(twice to take Otto hunting and maybe a News years day hunt in Moore Co) but the rest of the winter I was going to concentrate on small game hunting and predator hunting.

So, on the 18th I headed to my Fox squirrel hotspot and for the first few hours I scouted around awhile to check things out, and then before dark I planned to settle in to a good spot and wait. During my trek though the woods I found 5 fox squirrel nests in an area where I could sit in the middle of those and be within 50 yds of every nest. Now, a fox squirrels nest is pretty easy to identify from a grey's as it is almost twice as big and due to that size it is usually in a fork in a tree instead of away from the trunk. All of these nest were like this with plenty of other sign around. Bout, 4pm I decided to head back and sit near these nest and I notice my camera has fallen off my belt. Crap, its in a camo pouch and I have walked alooong ways! To make matters worse , its not easy to find a camo camera pouch when the woods is full of wiregrass clumps and Longleafs in the grass stage plus I had zigzagged through the woods. I finally found it just before dark so I didn't get the chance to hunt the cluster of nests.

Fast forward a few days later and I get to this spot at 3 pm. Sit down and plan to wait it out. This is where I will see one. 5 minutes later this jet black one comes back and my new to me 16 gauge barks and I am limited out. Not the biggest Fox squirrel I have shot but still a lot bigger than a grey. Gonna be some good eating and the tail will be used for tying some flies. I have 3 pumps but would rather hunt squirrels with a single shot. I guess it reminds me of my younger days. 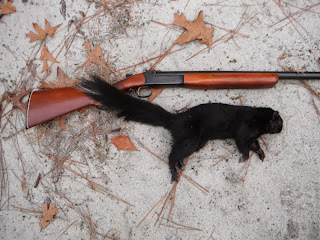 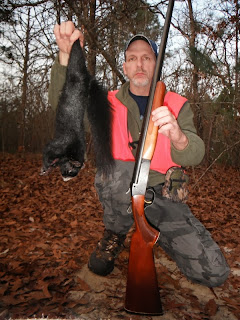 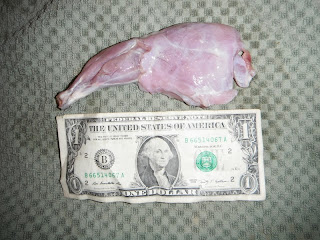 Mack
I enjoy anything in the outdoors. Mainly canoeing and fishing but, also hunting, hiking, I love to plant trees and also search for big trees. I grew up just outside Burlington, N.C. where my parents house sat on a bluff overlooking the Haw River. I can thank the Haw for getting me started in the outdoors. If you would like to join me on a paddle just email me and we can make it happen. Note: I don't list all the locations where I fish> This is to protect a small flow. If you are a follower , email me and i will tell you 95 perecnt of the places i fish. I have 2 blogs. 1 for my outdoor interests and the other is Mack's Wildlife Damage Control Blog which I help people deal with animal problems in the Cary, NC area. Mack

Must Read Sites For River Fishermen

Must Read Books for River Fishermen